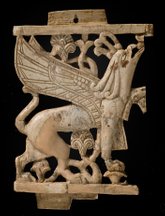 Phoenician and Punic antiquities in Belgian and Dutch collections

The Corpus of Phoenician and Punic Antiquities -

The International Union of Academies (UAI-IUA)  is the global organization of national academies in the fields of the humanities and social sciences.

Its aims are to initiate, recognize, foster and fund basic long-term international research projects. Created in 1919 in Paris with a general secretariat established in Brussels, the UAI-IUA comprises at the moment more than a hundred academies from 63 countries from all continents.

Recognizing that many substantial projects in humanities and social sciences cannot be realized within a short time span, the UAI-IUA prides itself on being willing to support significant long-term projects.

The UAI-IUA is constantly launching new international projects, encouraging cooperation and interdisciplinary activities between national academies (and comparable institutions). These should result in the creation of fundamental reference tools, such as dictionaries, encyclopaedias and text editions, some of which are disseminated on the web, for the benefit of both specialists in the research field and the general public.

The UAI-IUA works to promote the advancement of knowledge, development of scientific exchanges and initiatives of its academies. The increasing number of projects, by its willingness to accommodate more members of academies, the UAI-IUA aims to represent the principle of excellence which animates it.

The Corpus of Phoenician and Punic Antiquities (Corpus des Antiquités phéniciennes et puniques - CAPP) is an initiative promoted under the aegis of the  Italian Unione Accademica Nazionale, which at once met with full support from several Mediterranean countries, including Spain, and Tunisia.

The object of the research is to list, classify and study the artistic and epigraphical monuments of the Phoenician and Punic civilization in association with the most important museums and with local and private collections, in order to build up a coherent body of documentation which will be published in its various categories as the work proceeds.

The Belgo-Dutch CAPP national committee invites you to explore this website, presenting its members and their research, providing a list of Corpus publications, announcing upcoming events and news, and presenting Belgian and Dutch collections with Phoenician and Punic antiquities.

A database including detailed descriptions and 2D and 3D images of the artefacts is under construction. It is anticipated that it will  be made accessible via these webpages in the near future.